The NFL season is right around the corner, and so is Fantasy Football. With the first Cowboys game of the preseason in the books, it’s about time we start projecting fantasy football choices for the upcoming 2013 season.

Despite a below average offensive line that gave up 34 sacks, the Dallas Cowboys offense finished the 2012 season ranked sixth overall, averaging 374.6 yards per game. The team reloaded in the offseason, picking up a few more threats that should be able to provide an immediate impact.

Expect good things this year from the Cowboys, in terms of fantasy football numbers. This may not equate to wins, but the team should be able to move the ball effectively on the ground, and through the air. Expect for Tony Romo, Dez Bryant, Demarco Murray, and Jason Witten to have similar numbers this season.

My projections are based on the Cowboys play selection in 2012, targets, completion rate, and overall performance last year. For the rookies on the list, I based their numbers on a mean, between the rookie average, and their last season in NCAA play. I also took into account, the opposition’s defensive rankings going into this season.

Rookie Gavin Escobar was brought in because he can make plays. Simple as that. (Rick Yeatts/Getty Images North America)

At 6’6” and 255 pounds, Escobar is a big threat that can get open. He has great size for a tight end, and he has focused on improving his ability as a blocker. He looks to be in position to be the backup to Jason Witten, but because of the packages, every tight end behind Witten will be in rotation. Escobar will see the end zone in his rookie season, but don’t expect it to become habit. 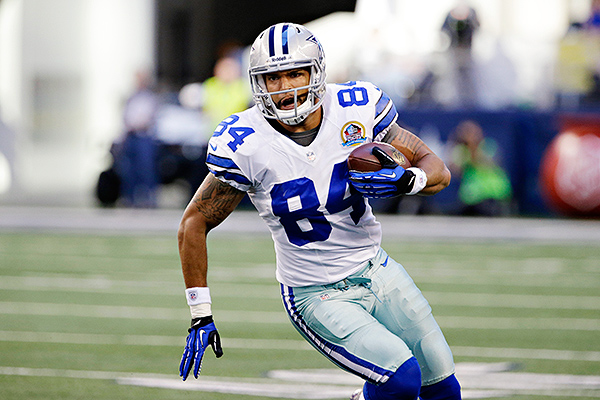 Tight end James Hanna is a solid tight end, who can stretch the field (espn.go.com)

Hanna made a name for himself in the Week15 game against the Pittsburgh Steelers, catching two passes for 45 yards. He showed that he does have the ability to stretch the field. Hanna is one of the best pure receivers on the team, and should make a lot more big plays in the two tight end set that the Cowboys will use this season. Just like Escobar, Hanna will get more targets this season, but Hanna should become more dependable in the red zone.

Dunbar shined in the Hall of Fame Game on Sunday. (dallasnews.com)

Rookie running back Joseph Randle has not looked good in camp so far.  This is not good for a team that drafted him, hoping that he would make an immediate impact. No worries, there is this kid from Haltom City, Texas, that averaged 3.6 yards per carry last season as an undrafted free agent. His vision has made a complete180 degree turn from last year, and he is proving to make a move up the depth chart. There is no reason that he should have to, and by time the preseason is over, Dunbar will be taking the backup duties for Murray.

Former ECU standout Dwayne Harris emerged as a the Cowboys number three receiver in 2012. What will he do in 2013? (dallascowboys.com)

Harris made his impact on the team as a receiver, and on special teams last season.  Harris finished with just 222 yards receiving, but his 13.1 yards per reception was ranked third on the team.  Harris also got a punt return for a touchdown last year. It seems as if the kick returner position is his to lose. He led the Cowboys with 33 of the team’s 71 kick returns. Don’t think that he has lost his opportunities at slot receiver. Rookie Terrance Williams is an exceptional player, but he will have to prove it on the field first. 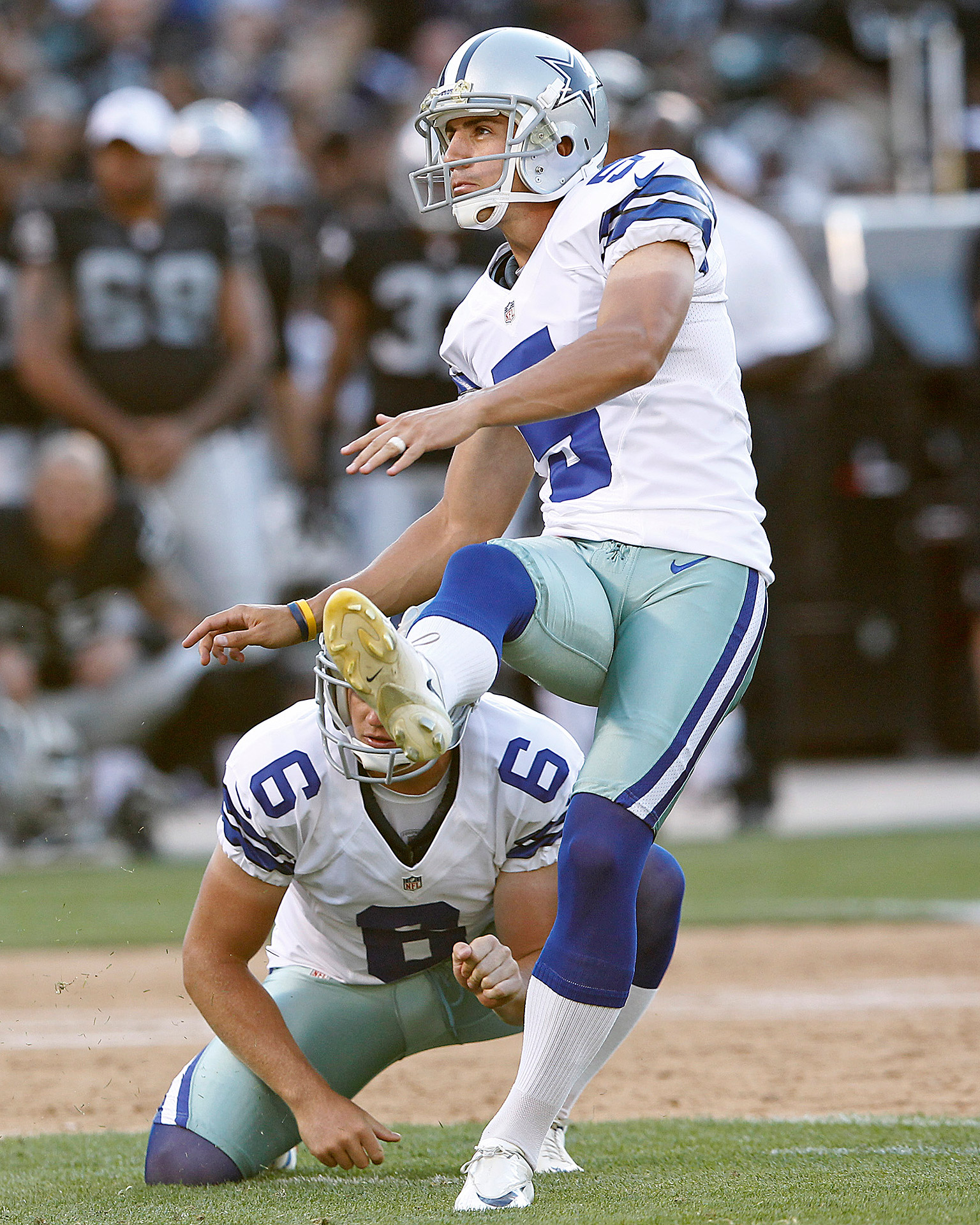 Kicker Dan Bailey has made some key kicks for the Cowboys, and looks to do the same in 2013. (espn.go.com)

Much has changed for that shaky kicker from Stillwater. Bailey has managed to improve his range, making a kick from 54 yards in camp. It was against the wind. Bailey was 29 for 31 last season, missing two kicks in the 50+ yard range. He was perfect on XP, and made a few clutch kicks too. With the Cowboys continuing to improve on offense, and an emphasis on red zone scoring this season, expect Bailey’s numbers to improve this season. If Austin can stay healthy, he will be a dangerous player for the Cowboys. (Al Bello/Getty Images North America)

Austin is surely the most questionable piece in the Cowboys’ offensive puzzle. Injuries have kept Austin sidelined, but didn’t stop Austin from raking in 943 yards last season. There is no question about his ability, and as quiet as kept, Austin is one of the best number two receivers in the NFL. It is not his fault that his head coach decided to utilize him as a running back on an unnecessary trick play a few years back (the Holley game). Austin will be depended upon this season, and he is capable of carrying his weight. Demarco Murray got a new running backs coach, and a new blocking scheme. Things should be solid in 2013. (Al Bello/Getty Images North America)

The best thing that could have happened to running back Demarco Murray is the offseason hiring of running back coach Gary Brown. Brown has had success as both a player, and a coach in the NFL. His ability to get the most out of players is exactly what Murray needs, especially since Murray has yet to finish a complete season with the Cowboys.  Brown’s running style has always required a fullback, but with the Cowboys switching to a zone scheme, and releasing fullback Lawrence Vickers. Both player and coach will have no choice, but to figure it out together.

What is there sad to say about Jason Witten, but that he is human? He has managed to reach the pro bowl in eight of his last 10 seasons. It seems as if no mater the age, Witten continues to get better. He has lost a little speed, but that has not changed his innate ability to get open, nor catch the ball. Truth be told, Witten, who is entering his 11th season in the NFL, is at the apex of his career. It will not be a generous decline, but you will notice that other tight ends are getting more reps. Last season was the first since Witten’s rookie season, that he averaged less than 10 yards per reception. Let me go on the record by saying that I do believe that Dez Bryant will break the 2,000 yard mark this season. Bryant is a monster, and has improved in every season that he has played. It is only a matter of time until he is the leader on this team, and I guarantee you that his play will reflect that. This will be Bryant’s first season as the Cowboys reception leader, and the breakthrough year, that will catapult Bryant into the pro bowl. Bryant has grown into a elite receiver that he is a threat that isn’t going anywhere. Look forward to a lot more long distance connections from Romo this season. 2013 is all about redemption for Tony Romo. (Rob Carr/Getty Images North America)

Things should only get better for Romo, who is easily the League’s most underrated quarterback. Romo has accepted additional responsibilities in the offseason, and has also been given more trust in the team’s offensive input. This means that it is Romo’s make or break season. He is great in producing big fantasy numbers, and looking at the team’s strength of schedule this season, I don’t see any reason why Romo doesn’t eclipse 5,000 yards this season. The offensive line will be catered to him, and this will go a long way, especially with him being sacked 35 times last season. Regardless of the Cowboys making the playoffs or not, Romo will have an amazing season in 2013.

DeMario Davis was born and raised as a sports fan in East St. Louis, Illinois. He grew up a major St. Louis Cardinals and St. Louis Blues fan. One of his greatest moments in sports was being able to watch Ozzie Smith and Brett Hull play in person while growing up. In the spring of 1995, DeMario and his family moved to Arlington, Texas. It was in Arlington where he was introduced to the Dallas Cowboys via a recorded VHS copy of Super Bowl XXVII. The very next year, he was able to watch his first Super Bowl live when the Dallas Cowboys defeated the Pittsburgh Steelers, 27- 17 in Super Bowl XXX. This was when fell in love, and found his home as a lifetime fan of the Dallas Cowboys. He remains true to his roots in baseball and hockey. DeMario later joined the United States Marine Corps in 2004. He served for five years as an Aviation Mechanic at MCAS Cherry Point, North Carolina. He was honorably discharged in 2009. He says one of his proudest moments was helping conduct emergency evacuations at the U.S. Embassy in Lebanon in 2006. He is currently studying Journalism and Radio Broadcasting at the University of Texas at Arlington. He is a big fan of rugby and currently plays for The Fort Worth Rugby Club in Fort Worth, Texas. He also volunteers annually as an assistant coach for a youth football team. He has played John Madden Football since there was no year in the title. His favorite Cowboy of his lifetime is Michael Irvin, and his favorite of all-time is Bob Lily. DeMario’s twitter handle is @thedemariodavis
You might also like
Dallas CowboysDan BaileyDemarco MurrayDez BryantSPORTS